On the hottest day of the year so far, two Crowns came together at the Miserden ground. The Crown & Sceptre of Stroud took on The Crown from Frampton Mansell in one of the regular friendlies the two pubs arrange for the two Sundays every season. The rules are much the same as those for the informal Stroud pub league, the exceptions being a prolonged 30 over format, and batsmen to retire at 35. As it happened on the day, neither of these new regulations was tested.

Sceptre skipper Ersh won the toss and elected to bat in the scorching heat of the early afternoon. A steady opening partnership put 35 on the board, Henry guiding. Luke top scored with 26, whilst newcomer Tom swiped 20 without having to run in the sun, an admirable policy. Both Jacksie and Moon worked their wood well. Pick of the visitor’s bowlers was Ken who returned tight statistics of 3 for 12 from his 3 overs. The Sceptre team were all back in the pavilion for a mere 121, after 26 overs. All enjoyed the fine spread, highlight of which was Katie’s stunning lemon drizzle cake. There may have been beers taken, purely as an antidote to the blistering conditions, naturally.

Ersh set a tight field in an attempt to throttle the Frampton Mansell men, with difficult half-chances in the opening overs for ‘keeper Murray (the only smudge in an otherwise faultless display) provided by the swinging medium pace of Paddy and Henry. The wickets soon started to fall, as the close fielding paid dividends; mostly, it must be said, the four catches snaffled by the skipper at silly mid on. Batsman Ed offered determined, obdurate opposition but never looked comfortable against the varying leg spin of Mike, who eventually had him caught out. Pick of the bowlers was Stevie with a miserly and destructive 3 for 8 from his 3 overs, and Luke chipped in with 3 for 12, including the golden duck of Mark, man of the match Ersh taking a low exocet to his left. The resulting hat trick ball would have been worth a shout, had LBW been being played. The Crown from Frampton Mansell were sent to the barbeque having reached just 75. Had the victory not been so resounding, it would be tempting to claim cricket as the only winner, but the Hat & Stick enjoyed their moment in the sun. 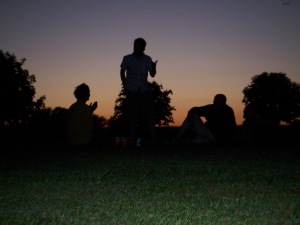