Travelling east from the small Nineveh province town of Snuny, parallel to the northern ridge of Mount Sinjar, our car passed hundreds of empty houses, entire villages abandoned in the wake of ISIL’s losses in the area.

In November 2015, after fifteen months of occupation, Sinjar and surrounding areas were retaken by Kurdish Peshmerga forces, and in the six months since very little in the way of rehabilitation and reconstruction has taken place.

As we round the eastern end of the mountain the imposing, damaged buildings of Sinjar Cement Plant give the first indication of the devastation lying ahead in the Yazidi majority town. Situated on Road 47, the strategically vital link between Mosul and Syria that was also retaken by the Peshmerga in November, the factory had received significant foreign and local investment in recent years and was a major employer in the area. 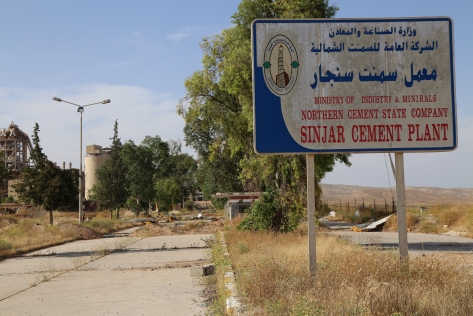 Yazidi Peshmerga guarding the buildings told Yalla that workers employed by the federal Northern Cement State Company were almost exclusively Sunni Arabs. “Even before ISIL came to this area, ISIL people were working in the factory. There were no Yazidis or non-Sunni,” Mam Kawa, a Yazidi guard told me. 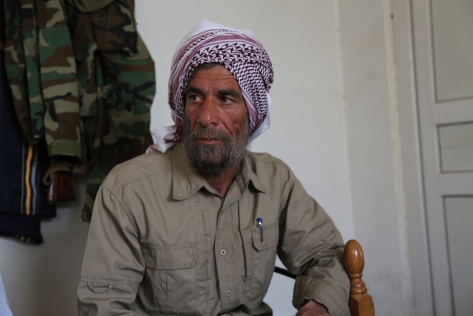 Trust has been broken in this community, not only along religious lines, but also with the government in Baghdad. “We want the factory to be administered by the Kurdistan Regional Government,” says Mam Kawa, “because when the federal government ran it the people that worked here were the people that joined ISIL. We [Yazidis] want to operate it under KRG administration.”

The factory will be integral to rebuilding Sinjar and surrounding villages, not just physically, but also for the local economy. As I would see elsewhere in Sinjar, the challenges that will be needed to be overcome to make this happen are daunting. Not only has all the skilled labour left, but also a great deal of equipment with it. “The director of the factory told me that ISIL looted equipment worth 9 billion dinars ($8.1 million). They took it to Badosh and established a new factory there,” claims Mam Kawa.

But reconstruction is some way away yet. The frontline with ISIL is extremely close, and the local security forces (Asayish) chief, Major Shingali, told Yalla that regular shelling is preventing civilians from returning to the town. “Until the old borders and countryside of Sinjar are liberated, the rebuilding process cannot start. The shelling is sporadic, sometimes the city is under attack for two or three days, and sometimes it’s quiet for up to ten days.” In these circumstances, repopulating the town is a distant consideration.

“Just two rockets could result in heavy casualties. I would prefer civilians not to return as the situation is not yet safe,” he says.

Shingali claims that specialist Peshmerga units have so far extracted around 40 tonnes of explosives, and that about 90% of IEDs and booby traps have been identified. It is not only conventional ordinance that is being uncovered, or deployed by ISIL in the shelling attacks. “There are definitely chemical weapons among the attacks – there was one last week.”

Mahama Khalil Qassem, Sinjar’s Mayor, agrees. “There have been chemicals and depleted uranium in this town which make it unsafe for civilians to live in the area.” The extent of the destruction is clear to see throughout the town and Qassem is quiet and considered as his outlines the task ahead. 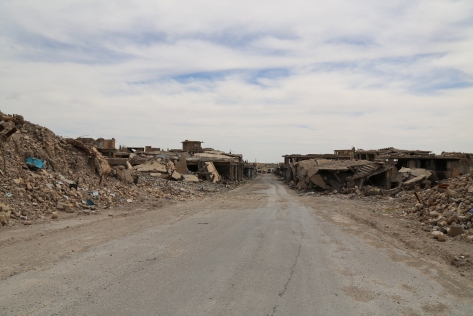 I met with him in his office, a medium-sized repurposed residential property in the centre of town. “85% of the houses in the city have been destroyed, 100% of the governmental offices and institutions and 80% of the collectives around Sinjar as well.” The fundamental utilities are completely compromised, with electricity generated house by house, and water delivered by tanker. The sewage system does not exist.

There are, however, signs of life and reconstruction in Sinjar. Small stores selling essentials have opened to serve the few that are living in the town – mostly government officials and fighters from the myriad forces’ bases. Kurdistan Democratic Party (KDP) Peshmerga make up the largest contingent, along with the local Sinjar Resistance Units (YBS). The Turkish Kurdistan Workers’ Party (PKK) retain a limited presence, as do the Syrian People’s Defence Forces (YPG). Civilians are harder to find, although ambitious sprouts of development are visible.

A small team of Mennonite Christians from the USA are busy replacing windows and doors in the few habitable buildings that remain. But with Sinjar still vulnerable to ISIL mortars and rockets, the task could be described as Sisyphean at best, and not all locals are in support.

Kalash, a Sinjari health worker now living in Snuny thinks that his adopted town would be better served by the efforts of the group. He told Yalla that ‘old’ Sinjar should be abandoned and left as a memorial to recent events, and a ‘new’ Sinjar built nearby. It’s a controversial notion shared by Mayor Qassem.

“As the administration of the town, we also believe that its a good idea to build a new Sinjar for a variety of reasons. First for the historic memory of what our people went through in this war. Second, economically it makes better sense to create a new Sinjar because the fundamental utilities of the town, including the sewage and electricity systems, are very old. 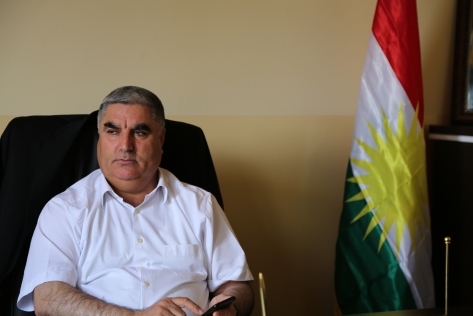 But he stressed that nothing would happen without consultation. “It’s not only the administration’s decision to build a new Sinjar, it’s the decision of the people. If people accept creating a new town, it will be easy.

“In my mind creating a new Sinjar is better economically, in terms of security and also in terms of people’s psychology – I say this an engineer, a fighter and a former MP and current mayor.”

Like the guards at the cement factory, Qassem hopes Sinjar will be governed the KRG in the future. He says Baghdad neglected the town even before the brutal occupation by ISIL. “Before ISIL came there was no economic crisis, but we haven’t received budget from the government since 2013. The Iraqi constitution recognises Sinjar as part of Iraq, but the people here want to be under KRG administration.”

Kalash agrees. Lying as it does in the ‘Article 140’ territories, the town has a right to a referendum to decide its future. He expresses cautious support for Erbil rule, because of the betrayal of his neighbours almost two years ago. “The Arabs here in Sinjar – when ISIL came they all started fighting us.”

Physically and psychologically destroyed, it appears trust will be as hard to rebuild as Sinjar.